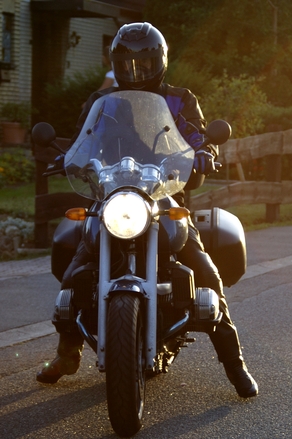 An 18-year-old man was killed in a motorcycle accident in Orange County after he was struck by a vehicle that was making a left turn at a street intersection. According to a news report in The Orange County Register, the fatal motorcycle accident occurred at the intersection of Rimhurst Drive and Trabuco Road in the city of Lake Forest. Officials said the teenager was headed northbound on Trabuco Road on a Yamaha motorcycle when he collided with a Hyundai that was making a left turn onto Rimhurst Drive near El Toro Memorial Park.

He was pronounced dead at the scene. None of the three people in the Hyundai was injured. Initially the Orange County Sheriff's Department, which is investigating the incident, said drugs and alcohol were not factors. However, the department later declined to provide updates on what caused the crash because it was still under investigation. A GoFundMe account was created to raise money for the family of the deceased motorcyclist. No arrests or citations were reported pending an official investigation.

Even though motorcycles account for only 3 percent of vehicles on the road, their riders and passengers account for 14 percent of all U.S. motor vehicle-related deaths, according to the Governors Highway Safety Association (GHSA). A recent report by the GHSA said motorcycle deaths have remained stubbornly high in the United States for the last several years. In 2013, 4,668 people died in motorcycle accidents.

That number was slightly lower in 2014 at 4,584. However, these fatality numbers are double the number of deaths tabulated during the late 1990s. Even though automobile accident deaths have been dropping due to improved auto safety features, motorcycle fatalities remain high. Motorcycle deaths accounted for only 5 percent of all U.S. motor vehicle deaths in 1997, but represented 14 percent of all motor vehicle deaths in 2013. The GHSA report blamed the high number of deaths on lax helmet laws, unlicensed riders, speeding and the use of drugs and alcohol.

Based on the news report this fatal Lake Forest motorcycle accident occurred when a driver attempted to make a left turn at a street intersection. According to the National Highway Traffic Safety Administration (NHTSA), left-turn accidents account for roughly 36 percent of all fatal motorcycle crashes. The risk of a left-turn accident is high even among four-wheel traffic. More than half of all right-way auto accidents involve left turns, according to NHTSA.

Most importantly, the risk of catastrophic injury for motorcyclists during a left-turn crash is higher in comparison to other motorists because of the vulnerability of a motorcyclist who has no protection unlike drivers or passengers of cars who are protected by a metal frame and have other safety devices such as seat restraints and airbags offering them added layers of security. Left-turn accidents commonly occur when oncoming motorcyclists are not seen or recognized by drivers who are making a left turn. Often, the motorcycle is struck by the turning car as the motorcycle goes straight through the intersection.

Motorists who are about to make left turns or U-turns at street intersections are required under the law to yield the right of way to oncoming vehicles. California Vehicle Code Section 21801 (a) states: “The driver of a vehicle intending to turn to the left or to complete a U-turn upon a highway, or to turn left into public or private property, or an alley, shall yield the right-of-way to all vehicles approaching from the opposite direction which are close enough to constitute a hazard at any time during the turning movement, and shall continue to yield the right-of-way to the approaching vehicles until the left turn or U-turn can be made with reasonable safety.”

Motorcycle accidents, especially those that occur at street intersections, tend to result in catastrophic or fatal injuries for the motorcyclists and/or their passengers. Often, the impact of the collision causes riders and their passengers to be ejected from the motorcycle. As a result, the victims hand on the hard pavement or are struck by other vehicles on the roadway. Some of the common types of injuries suffered in these types of accidents include head injuries (traumatic brain injuries), spinal cord trauma, multiple broken bones, road rash and internal organ injuries. And as we saw in this Lake Forest motorcycle accident, these types of incidents could result in a tragic death.

So, who can be held responsible for a motorcycle accident? A number of parties could be held civilly liable for the injuries, damages and losses sustained in an Orange County motorcycle accident. If the driver is determined to have been negligent or to have committed some type of wrongdoing (for example, drunk driving), then he or she can be held financially responsible for the losses in addition to potentially facing criminal charges.

In some street intersection accidents, a dangerous roadway condition such as a poorly-designed intersection, could also cause or contribute to the incident. In these types of cases, the city or governmental agency responsible for maintaining the roadway can also be held liable. Please remember that any personal injury or wrongful death claim against a governmental entity in California must be filed within six months of the accident.

When a motorcyclist is killed due to someone else's negligence or wrongdoing, his family can seek compensation by filing what is known as a wrongful death lawsuit. Such lawsuits are brought by immediate family members (a spouse, child, parents or other survivors) and seek compensation for damages such as medical expenses, funeral and burial costs, pain and suffering and loss of love, care and companionship.