Why Progressive’s Motorcycle Claim Infographic Is A Sham 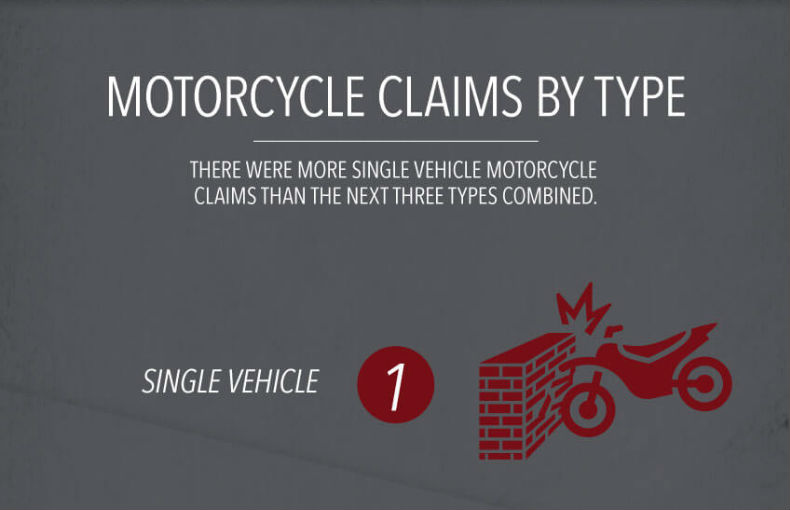 Progressive Insurance, a company that is notorious for provoking consumer complaints that result from its failure to pay claims, recently released data in the form of an “ infographic” regarding motorcycle claims in 2014. Much of the data reports the obvious. The weather is more conducive to motorcycle riding in summer months so more claims pertaining to motorcycle accidents are filed in the summer. Recreational riders hit the road on weekends so more accidents occur on weekends.

In at least one respect, however, the infographic is misleading. Under the heading “Motorcycle Claims by Type,” Progressive asserts “there were more single vehicle motorcycle claims than the next three types combined.” The “next three” are rear end collisions, intersection accidents, and vehicle theft claims. Damage to parked bikes rounds out the five claims categories listed in the infographic.

Where are the other claims?

Conspicuously absent are accidents caused by cars changing lanes and striking a motorcycle or forcing a motorcycle off the road because the car's driver did not notice that the motorcycle occupied the lane. Perhaps when a motorcyclist is forced off the road under those circumstances, Progressive counts it as a “single vehicle” claim because no collision occurred.

Also missing from the claims categories are head-on collisions. One article (unfortunately not linked to primary sources) reports that collisions between motorcycles and other vehicles account for most motorcyclist fatalities, and that three-quarters of those occur when a car strikes the motorcycle from the front. Whether or not those statistics are accurate, it is clear that head-on collisions between cars and motorcycles are a significant cause of accidents. Why don't they show up on Progressive's list of claims?

Do motorcyclists drive into walls?

In any event, the most misleading aspect of the “infographic” is not the list of claims by type, which is open to interpretation, but the graphic itself. Next to the numeral 1 and the words “single vehicle” is a bright red drawing showing a motorcycle colliding with a brick wall.

Are motorcyclists who drive into walls the most common filers of motorcycle claims with Progressive Insurance? That is apparently what Progressive wants the public to believe. The graphic is at best an offensive caricature of how motorcyclists drive.

According to the Hunt Report, a comprehensive study of motorcycle accidents commissioned by the National Highway and Traffic Safety Administration (NHTSA) in 1981, the “most common motorcycle accident involves another vehicle causing the collision by violating the motorcycle's right-of-way at an intersection … because the driver does not see the motorcycle.” Only one-fourth of the accidents documented by the Hunt Report involved single-vehicle collisions.

The Hunt Report is admittedly dated. Perhaps changing times have resulted in an increase in single vehicle motorcycle accidents. But have motorcyclists suddenly begun to drive into brick walls? According to the Hunt Report, the most common driver errors that result in single vehicle accidents are slide-outs due to overbraking and losing control on a curve due to excessive speed or under-cornering. Colliding with brick walls did not make the list of driver errors.

Not all claims are created equal. Progressive's list of claims draws no distinction between claims for property damage, claims for personal injuries, and claims for fatal injuries. The most serious claims are obviously those in which someone dies. According to NHTSA's National Center for Statistics and Analysis, more than half of all motorcycle accidents that result in death involve collisions between a motorcycle and at least one passenger vehicle. Of those, it is nearly always the motorcycle operator who dies. Much less commonly, a motorcycle passenger dies. In only 1 percent of the collisions does an occupant of a car die.

Notwithstanding Progressive's misleading “infographic,” the most serious motorcycle accidents are not single-vehicle accidents but collisions with other vehicles. They are clearly not accidents in which motorcycle drivers collide with brick walls. Progressive might believe its brick wall graphic is clever or cute, but the graphic belittles the risks that motorcyclists take every time they venture onto a road that is overwhelmingly dominated by passenger vehicles.