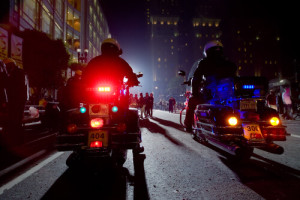 Die-hard motorcyclists are always looking for great jobs where they can ride their hog, but for one biker working as part of Obama's motorcade, a prestigious moment turned into an embarrassing spectacle.

Specifics were difficult to obtain, but it has been confirmed that there was an accident involving a motorcycle that was part of the escort for President Obama in Los Angeles on Friday morning.

The accident happened on the 405 freeway near the Olympic Boulevard exit around 10:30 a.m. The officer in question was reported to have been uninjured, but was later transported to the hospital by emergency workers.

The motorcade was reportedly making its way to LAX Airport after President Obama's weeklong visit in California. The motorcade had motorcycles, CHP vehicles, sport utility vehicles, standard police cars and the president's limo.

What Happens To the Motorcycle Officer?

It is unknown whether the motorcycle officer who was believed to be involved in the collision was responsible for it. Those working as part of these security details go through extensive training.

If the officer in question was responsible for the accident, his job security may be at risk. This situation put an embarrassing spotlight on Obama's security detail.

If the motorcycle accident was not the officer's fault and he or she suffered injuries as a result of it, the officer would likely be eligible to receive compensation for the damages that he or she has incurred, including compensation for medical expenses, pain and suffering, lost wages, and more.

L.A. Motorcyclists Get the Short End of The Stick 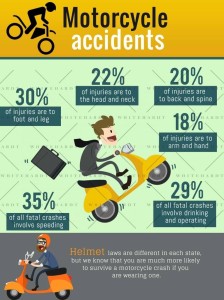 Do you ride a motorcycle? If you do, you're fully aware of how dangerous the streets are for bikers.

Statistics show 50% of motorcycle accidents occur when a car turns left in front of them because the car's driver did not see the motorcycle coming. Studies also show that motorcyclists are not at fault for 70% of accidents between a car and a motorcycle.

A lawyer who specializes in this type accident can fight to protect your rights. Insurance companies have well-trained representatives that fight hard to place the blame on the motorcyclist so they can avoid paying damages.

Those injured in collisions that wish to pursue compensation against the responsible driver need to speak with an experienced attorney to avoid missing important deadlines and evaluate whether the case truly has merit.

The rider in the Los Angeles Obama motorcade was reported to have not suffered serious injuries, but he easily could have. Since the officer in question was on the job at the time of his motorcycle collision, his or her path for obtaining compensation for medical expenses is different.

These situations can give people a false sense of security. They mistakenly believe their medical expenses and lost wages will be taken care of by their employer. This is not always the case.

Whenever a person suffers serious injuries in a motorcycle accident, regardless of the situation, it is always a good idea to speak with a Los Angeles motorcycle attorney afterwards. There is simply too much at stake…